This is chapter 2 in my MG/YA Zombie series, You can read it from the beginning in Death and Zombies. 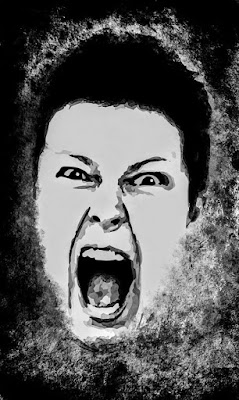 “Darlene, what’s going on?”
“Get back in the car, Steve”
“Mr. Wilson’s a zombie, you know?” Steve said.
“I said, get back in the car, Steven!” Darlene pushed her brother back toward the garage and the car. She bent over Mr. Wilson to help him up. Broken hip or no broken hip, she wanted to get him inside before crazy Mrs. Ayers saw them. Petunia might not satisfy her appetite.
“Darlene, no,” Steve said, “He’s a zombie.”
“Steven, stop it. There are no such things as zombies. It was at that moment that Mr. Wilson managed to push himself to his feet. He grabbed hold of Darlene and bit down on her arm.  Darlene screamed and tried to push Mr. Wilson off of her, but for a frail old man with a broken hip, he had a pretty strong grip.
“Steve, help me!”
“I’ve got this,” Steve said, turning and grabbing a baseball bat that he’d left in the yard.  He swung it at the old man’s head, cracking it open like a melon. Mr. Wilson went down and Darlene grabbed Steve and ran for the car.
“Darlene, you’re going to be a zombie.” Steve sounded terrified and impressed at the same time.
“I’m not going to be any such thing,” Darlene said. “There are no such things as zombies, and even if there were, Mr. Wilson doesn’t have any teeth.”
“So he just gummed you. Cool.”
“No, not cool. He still tried to make a snack out of me … not to mention the slobber.”
Across the street, Mrs. Ayers had taken notice of what was going on. She lurched to her feet, tossing her breakfast to the side and began making her way toward the siblings. She was dragging her foot behind her, and despite looking, well, dead, she was moving along pretty well.
“Oh crap,” Steve said,  “fast zombies.”
“Get in the car.”
Steve climbed in and grabbed his seatbelt to buckle up. Darlene put the car in gear and pulled back into the garage.
“Darlene, what are you doing? We need to go the other way.”
Darlene hit the remote and brought the garage door down. Outside they could hear Mrs. Ayers banging on the door.
“Getting help.” She pulled out her cellphone and dialed 911. It rang. And rang. And rang some more. No one answered.
“The Z.A. has begun,” Steve said.  “No one is coming to help us.”
“There are no such things as zombies or the zombie apocalypse,” Darlene said, frustrated. “I’ll call mom. She’ll know what to do.” Before she could dial her mom’s number though, the phone lit up with an incoming call. Darlene breathed a sigh of relief. “Speaking of … it’s mom. Hello, mom, you won’t believe what’s going on here …”
“Honey, I bet you got zombies in the yard.”
“Well, that’s what Steve says, but mom, you know there’s no such thing as … wait, how did you know?”
Sarah Quincy laughed nervously. “Because I’ve got zombies here.”
“Zombies aren’t real.”
“Yeah, that’s what you would think, but turns out they are. I can’t get hold of your dad and right now I’m kind of trapped in a closet, so I need to talk to your brother.”
“Steve? Why?”
“Because he knows what to do in the event of a zombie outbreak. Now please, hand him the phone.”
Darlene handed Steve the phone.  She couldn’t believe this. Was everyone playing a huge practical joke on her, some kind of a Halloween prank? Zombies? No way. But she’d seen for herself, Mrs. Ayers eating Petunia. Petunia was a mean cat. She didn’t like being pet, and certainly wouldn’t have consented to being held down by Mrs. Ayers. She remembered how just last week, the old woman had threatened to kill Petunia if she caught her in her garden again. She was reasonably certain that Mrs. Ayers, no matter how upset she was with the cat, wouldn’t eat it.  And Mr. Wilson’s head caving in hadn’t been fake, so even if it were a prank, someone would have stopped it at that point.  Darlene tried to follow what was going on, listening to her brother’s end of the conversation.
“Do you have anything you can use as a weapon … No, bleach spray isn’t a weapon … Because they’re undead, bleach isn’t going to stop them … A hammer? That’s good, but you have to get close enough to use it. How many are out there … Only three … Oh, the flu. I see. Ok, this is what you do, open the door and swing at their heads … Yes … Because that’s how you kill zombies, you bash their heads in … Mom, I didn’t make the rules, that’s just how it works. And don’t get bit. If you get bit, you become a zombie too … Ok.” He handed the phone back to Darlene. “She wants to talk to you now.”
“Mom?”
“Darlene, I know this is very unusual, but you need to do something for me. Listen to your brother. He has watched every zombie apocalypse movie there is. Do you remember where we used to go camping?”
“Yes.”
“I want you and your brother to head there. I’m going to try to get out of here and then find your dad. We’ll meet you there.”
“But mom …”
The phone went dead. Darlene looked at it, then at her brother.  Was this real?
“What did she say?”
“She said to listen to you and meet them at Camp Little Foot.”
Steve nodded his head. “We’ll need supplies then. Pop the trunk.”


To be continue with chapter 3, The Temple of Gah.