This is chapter 7 in my MG/YA Zombie series, You can read it from the beginning in Death and Zombies. 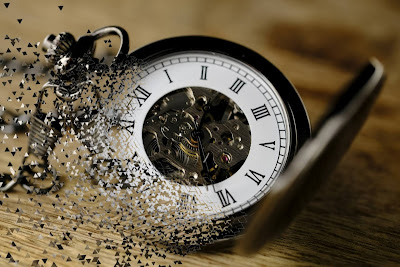 ‘This is insane,’ Steve thought as he headed for the tree. ‘Darlene is right, this is probably a trap. Smart zombie or something like that. Even if it’s not a trap, where are we going to go; it’s a hollow tree. We’ll be trapped. Wait, there’s not even enough room in there for all of us …’
His realization was too late though. He’d reached the tree. He tried to come to a halt, but Darlene, who was close behind him, ran into him and shoved him through the opening. He fell forward, expecting to feel dirt and bark against his skin. Instead he found himself falling down a deep hole. Above him, he heard Darlene and Jason yelling. He looked up to see that they were free falling with him.
‘I hope the zombies aren’t coming along too,’ he thought, and then he landed on something soft. He bounced a few times, before rolling off onto the ground.  Looking around, he realized he was in a bedroom and that it was a bed he had landed on. Before he could process anything else, his sister and then Jason, bounced on the bed before bouncing off and onto the floor. Then the zombies. Two of them. His bat was in his hand still, and Steve pulled back, ready to bash some zombie head, but Darlene yelled for him to stop.
“It’s Daniel,” she said.
“So? He’s a zombie.” Steven prepared to swing the bat. His sister would thank him for it later, crush or no crush on the guy. Zombies did not make good boyfriends.
“Steven, I said no!” Darlene put herself between the bat and Daniel.
“Hold up, hold up,” another voice said. “There will be no zombie bashing in my room. Blood is a too hard to get out.”
“Death?” Jason asked the … person? … in front of them.
“The one and only. And you are the ne’er-do-well that took my cloak.”
“And your scythe,” Jason said, “he took your scythe.”
“That too. So where are they? Hand them over.”
“What’s a ne’er-do-well?” Steve asked, eyeing the two zombies in the room. Daniel and the other one who resembled Josh Tieman, only shorter, were just standing there. Steven thought the second might be Josh’s brother.
“An idle or worth less person …  good for nothing louse.”
“That’s a little unfair …”
“A thief.”
“I left a note. You never came for them.”
“You never should have taken them.”
“Finders. Keepers.”
“HAND THEM OVER!”
“If he gives them to you, will you fix this?” Darlene asked, interrupting their argument. “Will you turn all the zombies back into humans?”
“It’s the Z.A.,” Steve said, “there are no do-overs.”
“I can totally turn everyone back to human,” Death said. “I can even do one better than that. I can start the day over, before this all started.”
“Whaaaa?” Steve and Jason both said.
“Sure, here, watch.” Death reached out and touched Daniel. He blinked, his eyes cleared from the hazy, glazed zombie look, his arm, which had been hanging limp by his side, straightened out and the wounds on his face healed. Daniel jumped back yelling something about zombies.
“It’s okay,” Darlene said, touching his arm. She blushed when he looked at her, and then let go.
“Where are we?” Daniel asked.
“What do you remember? Darlene asked.
“I was at home and my mom said she was hungry. Then she tried to eat my arm.”
“What about you?” Steve asked the boy who looked like Josh.
“My neighbor. She’s always been real nice, only today she wasn’t.” The kid looked at his fingers, counting them to see if they were all there.
“Wait a minute,” Daniel said, “we were chasing you, and then we fell down this hole …”
“Yeah, I didn’t get the opening closed in time, but really, you were cutting it kind of close there, kid.” Death shook his head at how close he had come to having several dozen zombies in his room.
“What’s this about you can reset the entire day,” Steve asked. “I didn’t think there were do-overs. I mean, dead is dead.”
“I’ve got this.” Death held up a pocket watch. It didn’t look very special. It didn’t even look like it worked. “It belongs to Khronos. He doesn’t know I have it.”
“So you stole it?” Steve asked.
“Borrowed. It’s either that, or I have to go and collect half your town and I don’t really like collecting zombies. They slobber, and the last time this happened, it took me three days to get all my fingers back, and I never did find all of my nose.”
“This has happened before?” Darlene asked. “How often do you lose your cloak?”
“I didn’t lose my cloak. Your ne’er-do-well brother stole it, along with my scythe. I can’t collect souls without my scythe”
“You could have come and got them,” Steve huffed. “I left you a note.”
“You didn’t tell me where you lived.”
“Oh”
“Yeah, I had to go around town asking people where you were. It doesn’t help when they tell me that you left and are living on the planet Zar now.” He glared at Jason when he said that. “I went to Zar. You weren’t there.”
“Zar’s real?” Jason asked. “Go figure.”
“Yeah. I try not to go there. That guy, Gah is a real weirdo. Now seriously, kid, give me back my stuff so I can clear up this zombie mess.”
“What’s this about zombies? And who are these people? Grim, you have some explaining to do.”
“Don’t look,” Death yelled, putting his hands in front of Steve’s eyes. “It’s my mom. She’ll turn you to stone.”
“I’ve got the snakes covered,” Medusa said. “Grim, why in Tartarus are there people in my basement?”
“Wait, your mother is Medusa?” Darlene asked. Next to her, Steve and Josh snickered.
“Dude,” Steve said, “you live in your mom’s basement.”

Continued with The Do-over