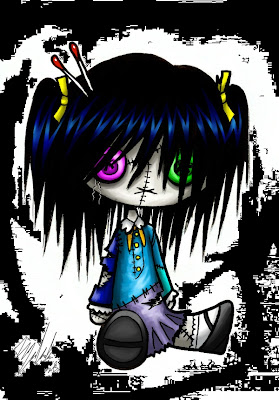 The girl clutched the dolly her mother had bought her at the market. The rag doll was magic, but no one knew it but her. It talked to her, telling her secrets that no one else knew. They were best friends, her and Dolly.

“Dolly says you shouldn’t yell at me,” the little girl said to her mother after she’d been scolded for not cleaning her room.

“Does she,” her mother said, feeling as though she had reached her last straw.  “Well Dolly is an annoying little brat that should mind her own business, don’t’ you think?”

The little girl put Dolly to her ear and listened patiently. She giggled at what Dolly said.

“Annie,” her mother said, trying to show some of the same patience in her voice, though she was getting ready to lose it.  “Put Dolly down and clean your room.”

“Dolly says you’re a bitch,” Annie said, then slapped her hand over her mouth to hold in the giggle. That was one of Dolly’s secret words that she wasn’t supposed to repeat, but now that she had it felt thrilling, especially seeing the way it made her mother’s eyes pop out of her head.

“Oh did she? Well I don’t think seven year old girls need to be playing with dolls that have such potty mouths!”  Pulling the doll out of wailing daughters hand she put it on the top shelf of the hall closet and marched Annie into the bathroom. “Open up,” she said, holding out a bar of soap.

“No mommy, please,” Annie begged, clamping her hand over her mouth.

Francine pulled her daughter’s hand away and shoved the wet bar in her mouth, mid protest. She held it there while the girl made grunting sounds, her eyes bulging as tears formed in the corner, spilled over and trickled down her cheek. When she was sure Annie’s tongue was coated she pulled the soap out.

Annie glared defiantly at her mother, who handed her a glass of water to rinse with.  It took two glass fulls before Annie could speak. “Dolly says she’s going to get you for that,” she said, making her words sound as threatening as possible.

“I welcome her to try,” Francine said, taking Annie back to her room. “While I wait for Dolly to do her worst, you can clean your room. I will let you out when dinner is ready. It had better be done or you will go right back in after you eat.”

Francine shut the door, wondering when seven year olds had become so obstinate. When she was her age she would have had her teeth knocked out if she’d ever talked like that.

Annie sat on her bed, her tongue still feeling scummy from the soap. She heard Dolly calling to her from under her bed where she’d been hiding so mommy wouldn’t see she’d left the closet.  Annie lifted the bed spread up and looked under.

“Mommy will be mad if she sees you here,” Annie said.  She listened a moment then nodded her head. Lifting Dolly off the floor, Annie placed her on her bed, then started cleaning her room while Dolly told her what needed to be done.
***
“I don’t know what we’re going to do about her,” Francine said to her husband while she brushed her hair. She was sitting at her vanity table and watching her husband in the mirror as she spoke.

“I really think you’re making more of a deal out of it than you should,” Mark said, setting aside his book to read later, when Francine was less talkative.

“Mark, she called me a bitch! Where does a seven year old hear that word from anyway?  And then she snuck out of her room and took the doll from the closet!”

“I don’t see how she did that,” Mark said. “If you really put it on the top shelf like you said.”


“What do you mean IF I really put it on the top shelf?  Of course I did and I don’t know how she did it, but I know the doll didn’t leave the closet on its own. Honestly, that child must think I’m stupid to try and tell me a story like that.”

“She’s seven,” Mark sighed, trying to placate his wife. What sounds absurd to us, isn’t all that unreasonable to a child with a vivid imagination. Give her some time and she will grow out of it.”

“She’s only seven,” Mark repeated. “You going to tell me you never told your mother you hated her when you were her age?”

“This was different,” Francine said, giving the doll that now graced the corner of her vanity a troubled glance.
***
Francine woke with something pressed against her chest. She sat up with a start when she saw the freaky rag dolls button eyes staring at her. How the hell did the damn thing get on top of her?  Flinging the doll across the room, Francine nudged her husband, thinking he was playing some kind of a practical joke on her. “Very Funny Mark.”

Mark didn’t answer so she nudged him harder. He moved a little. Not much, but enough for Francine to notice the sheet under him was wet.  Turning on the light she saw that Mark was covered in blood, the sheets stained with crimson gore.  Screaming, she fell out of the bed, only to find herself at nose level with Dolly who was lying on the floor next to Annie’s bare feet.  Looking up, Francine saw her daughter standing over her, a bloody knife in her hands.

“I told you Dolly would get you,” Annie said and then brought the knife down, slashing into her mother’s  face.