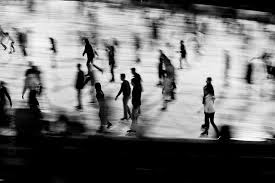 “Check it out, George!” Judith ran across the snow and onto the ice. The pond was frozen solid and she slid halfway across before coming to a stop. “Come on George, it’s fun. Remember when we went ice skating a few years ago?”

“Judith, come on, we don’t have time for play. Mom wants us home. You know how she is." He struck a pose, imitating their mother. "The world might be falling apart, but Christmas dinner is a tradition. Besides, the ice might break.”

“No it won’t, it’s solid, see.” Judith stomped her foot up and down, just to show her brother it was strong.

“Oh yeah, that’s fine, go ahead and test it. What would you do if it did crack? Expect me to come out there and save you?”

“It’s not gonna break, you mor…” Judith’s eyes widened and she looked past George.

“What’s the matter? Cat got your tongue?”

George heard it then and knew what it was that had his sister turning so pale. He turned, confirming his suspicions, one of the damn dead was coming up behind him. It wasn’t moving fast, probably because the cold was freezing the limbs, but it was closer than he would have expected. Where had it come from?

“Shut up, Judith,” George scolded. “It’s not moving very fast. The cold has it half frozen.

“You know what dad says,” Judith hissed, “where there’s one, there are at least five more. I don’t want to stick around for his friends to show up.”

“Oh come on,” George said, bending over and picking up a handful of snow. “Just a few minutes ago you were wanting to have a little fun… well, let’s have some fun.”

“What do you mean… oh!” Judith’s mouth dropped open when George threw a packed snowball at the zombie. The weapon smacked the creature in the face, but it didn’t stop him. The thing kept moving, undeterred.

“Here, let me try,” Judith said, “you throw like a sissy.” She hauled back and tossed it.

“Hey, look. There’s more.” Judith was pointing towards the woods and sure enough, three more zombies were ambling out.

“I don’t know, it’s all fun and games, until one of us gets bit… and those three aren’t moving as slow as the other one.”

“They still aren’t very fast. We can outrun them. Trust me.” And he hauled off and hit the female zombie in the side of the head.

They had been busy watching the three new arrivals, they had forgotten about the first. George skipped backwards onto the ice and laughed. “Still faster.”

“George, not funny. Now come on, let’s go home before more come.” She turned around, ready to drag her brother with her and froze. There were at least a dozen dead on the side of the lake.

George dropped his snowball. “Holy crap, where did they all come from?”

“This is your fault,” Judith said. “Mom is always telling you not to taunt the zombies.”

“Hey, I wasn’t the only one to throw a snowball you know.”

“Yeah, but you started it. I just wanted to go ice skating.”

“Can we discuss who’s right and who’s wrong, later? Let’s get out of here. There’s an opening over there…”

“That’s the far side of the lake.”

“You wanted to ice skate…”

The two began moving across the lake. Some of the dead stepped onto the ice to follow them and Judith almost laughed when they ended up face down. But then the zombies began scooting across on their bellies.”

“Come on,” Judith said, yanking on George’s arm, “let’s go home. Dinner's waiting.” She took a few steps towards the middle of the lake and then froze. Beneath her there was a cracking sound.

And then the ice broke and the two fell into the water.

Judith pounded on the ice. She had been pulled under by the current and the opening was no longer in sight. She didn’t know where in this mess George was either. She hoped he’d get out. Above her she saw the face of one of the dead, pressed against the ice. He looked hungry.

‘Probably angry he can’t reach me,’ Judith thought. Her throat burned and she wanted to suck in air, but she couldn’t. ‘I’m going to die,’ she thought, ‘but at least those things won’t have me.

Something tugged at her feet and relief rushed through her. George… at least they would be together. She turned to look at him, hoping for some comfort, but it wasn’t her brother she found herself staring at. Judith opened her mouth to scream and water rushed in. Then the zombie bit her. She struggled, she didn’t want to die like this. Through the water, she saw George. He was swimming towards her. Then something hooked onto her sweater and she felt herself being pulled out of the water.

Judith rolled over, spitting water out. Her leg burned from the bite. She wanted to warn her rescuers that she was contaminated, but she needed to worry about George first.

“My brother, he’s down there.”

“Do you hear me?” Judith gasped, struggling to get loose while her rescuers drug her across an unbroken section of the ice. “My brother is down there. And there’s dead down there too. You have to help him.” Then she felt one of them grab her leg.

“What the hell… Mark, did you take a bite out of her? You couldn’t wait?”

She twisted, so she could get a good look at them. Whoever had her was making a lot of guttural noises. They almost sounded like…  ZOMBIES!

“This is going to be the best Christmas dinner yet,” Frank grunted.
Posted by Lisa at 8:32 PM